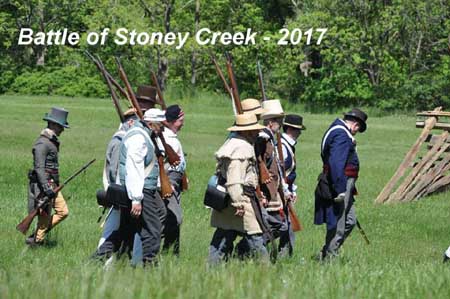 Both IMUC and our Artillery Company, IMAC, were present for the 2017 Battle of Stoney Creek. IMAC (The Incorporated Militia Artillery Company) were also present for the Friday Education Day and manned the site cannon for the visiting schools. The 150 musket salute for Canada's 150th went off well. IMUC played both sides of the conflict this weekend, doing well both in British redcoat and US militia grey! 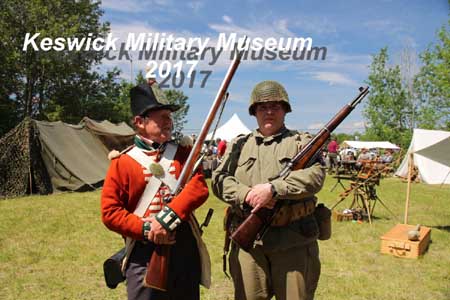 Today was The Incorporated Militia of Upper Canada's first "history timeline" in many years. We joined other historical military time periods. The other military units included, Fenian Raiders, World War 1 Canadian soldiers, World War 2 Russian, German, American and Japanese soldiers as well as modern Canadian Army and Navy personnel and veterans! There definitely was a variety of weapons and tactics on display! This was the museum's 10 Annual Military Day and from reports the most successful! Thanks To Bruce Whitaker for inviting us to be part of the Museum’s celebration of history!

Some pictures from today can be found here.

A link to the museum’s website can be found here. 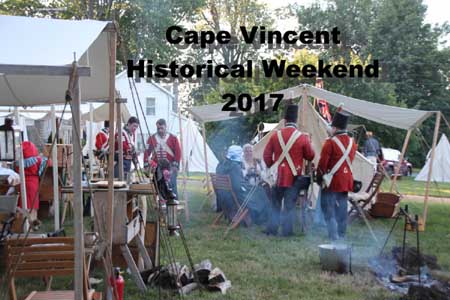 For the last several years, The Incorporated Militia of Upper Canada have been the guests of Mike Chavoustie and the Cape Vincent Chamber of Commerce during their Historical Weekend celebrations.  Members of The Canadian Voltigeurs and the crews of three 1812 landing boats made up the rest of the invading British forces.  We even picked up a stray 49th officer this year!

In the past, several tall ships have called in for the Saturday night attack.  Unfortunately they could not be accommodated this year as the water was too high and the piers were all under water!  Members of Forsythe’s Rifles made up most of the defending American Militia.  As always, we were made to feel  very welcome by the many local residents and visitors on Saturday and Sunday!

Pictures can be found here Many thanks to Denise Lundgren