The Incorporated Militia was once again invited to the Sackets Harbor Battlefield for their War of 1812 weekend.  Again we were treated royally by the site, staff and town! Several Royal Navy crews including the Earl of Moira joined us “on land” as the town docks were all under water! Everyone on site was entertained by the traditional sea chanteys of “The Bosun’s Call” who travelled all the way from Virginia Beach!  Saturday’s record winds made things interesting for those under canvas!  Only a couple of tents and awnings went down!  We picked up a stray RNR and a spare Royal Scot to fill out our redcoat attack force.  Even with the help of the ships’ companies, the American troops prevailed, again!

And nothing says 1812 better at Sackets Harbor than an antique Fire Engine parade!

We headed across the battlefield in kit to watch them go by. 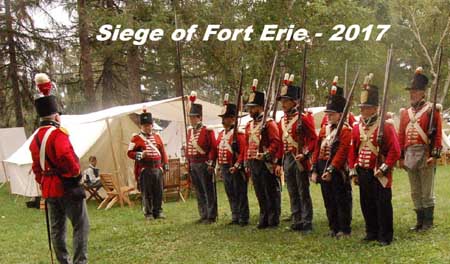 For over 30 years IMUC has been participating in the re-enactment of the Siege of Fort Erie.  Always a well animated weekend with cannon barrages, an evening fort siege tour and participant camps above and below the fort.  Natives, Americans and sutlers added to the site brining life to this important part of Canada’s history! We fielded a strong section of 12 muskets, and climbed the walls once again!

Below - A Line's Eye View of the evening battle... 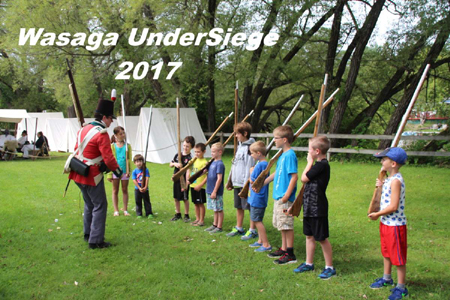 Nancy Island was again our home for the past weekend. IMUC, IMAC, The Canadian Volunteers, The Royal Newfoundland Regiment, the US 22, the Royal Artillery including The Nancy and the Royal Navy including the Earl of Moira set up camps on the island. A series of demonstrations, presentations and fun family activities filled the two days. Once again The Friends of Nancy Island, Dave Brunelle and his corps of volunteers hosted this annual event.

At first we weren't sure if we would get any pictures but thanks to Jacquie Durham, Carol Whelan and ones gleaned from Face Book by John Stephens and Steve Zronick we do have a representative set! As this was the 4th of 7 events in a row our, participation was not up to the usual numbers. Our die-hards, however could be counted on to support this Royal Scot event! All reports indicate everyone had a great time!