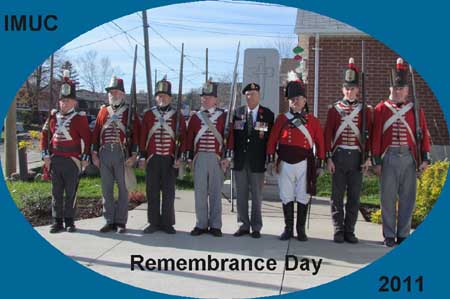 Members of the Incorporated Militia of Upper Canada participated in two different Remembrance Day Ceremonies.  The first was in Bradford Ontario on Sunday November 6 at the invitation of the Bradford Legion.  As not all members are available during the week, this weekend ceremony gives some members a chance to participate.  The other ceremony was at the Cenotaph in Burying Ground on the Fort York Common.  This ceremony involved fort staff, the IODE, members of the regular Canadian Forces and members from the different police, fire and ambulance services.  A very large crowd paid their respects to those who had gone before us and to those veterans who were able to attend.