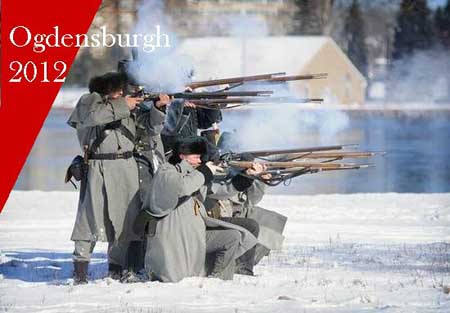 OGDENSBURG — The sounds and smells of cannon and musket fire filled the chilly winter air around Fort de la Presentation on Sunday, just as they did nearly 200 years ago.

“We try to hold it on a weekend near the date. This is the 199th anniversary, and next year is 200. This is the lead-up to the event.”

“One hundred ninety-nine years ago, there wasn’t much in the way of roads. Major travel was on the river,” Mr. Reagan said, noting the river was used to transport ammunition, clothing, food and other supplies.

“That meant Forsyth and his rifle company used this as a staging area to launch an attack on shipping and prevent British ports from getting any more supplies,” he said.

By the winter of 1813, he said, those in the British army felt Capt. Forsyth had been a threat for too long, so they walked across the ice and launched their attack. Coming across the river in two columns, one group went to Fort de la Presentation and the other to the village of Ogdensburg on the other side of the Oswegatchie River.

Mr. Reagan said the British deliberately launched the attack in February because they knew there would be fewer men to oppose them. “They didn’t fight a lot in the winter. The village had a small number of defenders. They were quickly overwhelmed by the much superior forces that swept through,” Mr. Reagan said.

The other group of British soldiers kept Capt. Forsyth and his men pinned down until the others had finished sweeping through the village.

“On February 22, the British were intent on driving from Ogdensburg Forsyth and his rifle company,” Mr. Reagan said. On Sunday, re-enactors shared that battle on Lighthouse Point as a group of onlookers watched.

“In 1812 and 1813, muskets were extraordinarily inaccurate,” Mr. Reagan said, and the troops fired in volleys, hoping their musket balls would hit something. James Hough, Ogdensburg, has been participating in the re-enactments for about 10 years, at his wife’s urging following his retirement.

Mr. Hough was one of the men manning the cannon for Forsyth’s 1st Rifle Regiment over the weekend.

“Safety is the number one priority. We kind of rotate. We teach people the different stations,” such as the “powder monkey” who delivers the powder to the men, Mr. Hough said.
Re-enactors are able to stay busy by participating in a variety of events.

“We’re on the road pretty much all summer,” primarily in eastern Ontario and upstate New York, Mr. Hough said.

It isn’t cheap being a re-enactor, but the love of the craft keeps Mr. Hough in uniform. “For us to go to Buffalo, it’s over $100 and we don’t get reimbursed,” he said.

Re-enactors also are accustomed to reliving the war in a variety of conditions, whether it’s 90 degrees in the summer or 20 degrees like it was Sunday.
“We’re used to it,” Mr. Hough said.

“Sites along the Seaway Trail work together to support each other,” Mr. Lear said. “Every American, we’re all historians. History is very popular these days.”

Like Mr. Hough, Mr. Lear looks forward to jumping into uniform and letting others see events that transpired nearly 200 years ago.

“It’s great to see your friends. Every time we get together and study history,” he said. “On weekends, we share our love of history. In the next couple of years, we’re going to be busy with the War of 1812.”

Also joining Forsythe’s Rifles were the Incorporated Militia of Upper Canada, The Glengarry Light Infantry and the Canadian Fensibles.