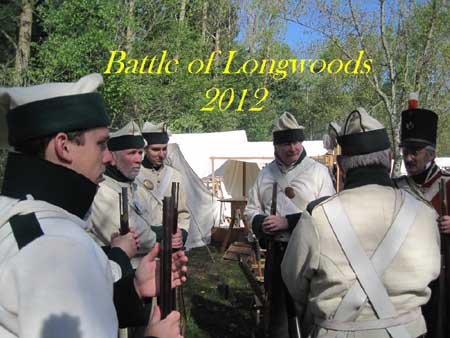 All winter during the “re-enactor off season”, we look forward to the official start of the year with the Battle of Longwoods hosted by The Royal Scots Light Company.  As usual, The Battle of Longwoods lived up to its high expectations!  The Royal Scots Lights, the Conservation Authority Staff and their volunteers made sure all went smoothly, again!

Different battle scenarios on Saturday and on Sunday were real crowd pleasers! 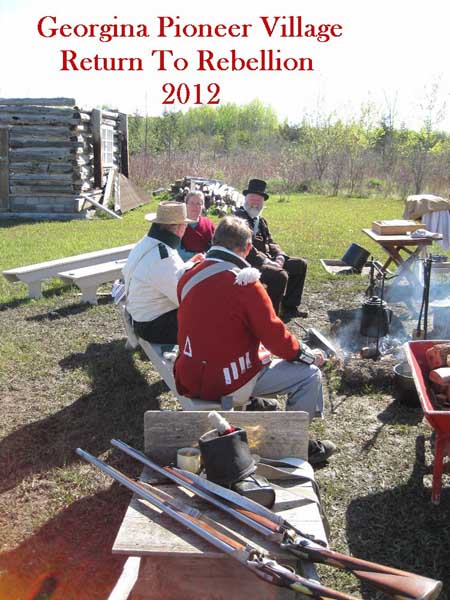 2012 marks the 175 anniversary of the 1837 Rebellions in Upper and Lower Canada.  The Incorporated Militia of Upper Canada was disbanded in 1815, but recalled in 1837 for the Rebellions.  By the time they were ready, the Rebellions were over.

Each year, as a way to supplement the Grade 7 History course, The Georgina Pioneer Village in Keswick organizes both Loyalists and Rebels to demonstrate both sides of this part of our Canadian heritage.

William Lyon MacKenzie, supported by likeminded Rebels took on the Family Compact and the Crown Forces of Queen Victoria.  Speeches were made, arguments were heard and decisions were made.  The Rebels marched down “Yonge Street , The Riot Act was read, and MacKenzie escaped disguised as an elderly woman.  The Incorporated Militia and The Campfollowers assisted Village staff and volunteers in bringing a more hands on dimension to this part of our Canadian History.

The Rebellions in Upper Canada: http://www.edunetconnect.com/cat/rebellions/

Local society acts out a skirmish at Westfield Heritage Village
By Samantha Craggs, CBC News
Posted: May 21, 2012 9:07 AM ET

Nelles can talk about what the soldiers of the 89th Regiment went through in the War of 1812. When it comes to the action and the drama, the heartache and the pivotal battles, Nelles has been there.

As a War of 1812 re-enactor, Nelles steps into the shoes of a 19th century soldier about six times a year. The Hamilton resident is one of about 100 re-enactors participating in the two-day Life in 1812 event that wraps up today at Westfield Heritage Village in Rockton.

When Nelles steps onto the battlefield today, he will do so as the great-grandson of Robert Nelles, a lieutenant colonel in the War of 1812.

“I've thought in the past that I know a little of what it must have been like for him because I do the role now,” Nelles said. “Sometimes I think it's destiny that I do this.”

Nelles is a member of the Wentworth Re-enactment Society, a group of about 10 men who portray members of the 89th Regiment of Foot.

'Sometimes I think it's destiny that I do this.'—George Nelles

Re-enacting is a serious hobby for members of the new 89th. Just getting started requires a financial investment, Nelles said.

Muskets cost about $1,400. The uniform must be either sewn or ordered. All told, uniform and musket can cost about $3,000, Nelles said.

With the bicentennial of the War of 1812, the new 89th is participating in eight re-enactments this summer, and anticipates that many next year, said Reg Bainbridge of Binbrook, society co-founder and sergeant of the 89th Regiment.

Each re-enactment is a three-day venture. The re-enactors — and often their families — camp out for three days, cooking food over a fire and sleeping in tents similar to those used by militia members 200 years ago.

By day, Bainbridge's wife Pat is a registered nurse. But at the encampment, she wears period garb as she scrubs clothes and cooks over a fire. Their daughter has portrayed a private in another regiment. Their grandchildren love to visit the encampment too.

It's a nice escape from everyday life, Pat said.

“It's nice to not have to be who you are in the busy world. When I do this, I'm at peace.”

The goal of re-enacting is to respect the sacrifice of the 1812 soldiers, said Richard Feltoe, re-enactor with the Incorporated Militia of Upper Canada and author of the new book Redcoated Ploughboys.

“Yes, it is a bit of a game because we're firing blanks,” Feltoe said. “But we try to do it accurately and with a sense of honour and service.”

From all walks of life

There are doctors, lawyers and police officers. Bainbridge is a civil engineer. Nelles is retired from Stelco and now volunteers at Westfield Heritage Village.

But re-enactors are hooked on history and portraying life as it was lived in that era, Bainbridge said.

“Something [the regiment] did a long time ago has made a difference in who we are today.”

As many as 500 people are expected at the village today. More than 35 buildings are open to portray Canadian life throughout the ages. The event runs from 10 a.m. to 4 p.m. today, with the re-enactment at 2 p.m. 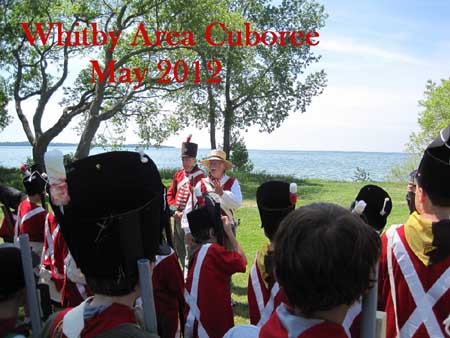 With the Bicentennial anniversary upon us, many groups are using the War of 1812 as a focus for special events and celebrations.  The Whitby Area Cub Scouts held their 1812 celebration this past week at camp on the shores of Lake Ontario, just south of Trenton.  Three hundred cubs and 75 parents, leaders and support  staff descended on Pleasant Bay Camp for a weekend of 1812 inspired activities.  Many of the cubs and leaders came uniformed in redcoat and US inspired “tunics”.

Congratulations to all involved for getting the 1812 message out to the younger generation.