This past weekend we were guests of the Feversham Ontario community during their annual Heritage Festival.  Camp was set up, visitors arrived and the streets were made safe for the subjects of The King!  Three times on Saturday the Incorporated Militia was called upon to drive American skirmishers from the town.  Sunday included a demonstration of the Manual of Arms and the Platoon Exercises.  All went well until those pesky skirmishers showed up again!
We would like to thank the town and the organizers for welcoming us into their community and letting us share our love of Canadian History. 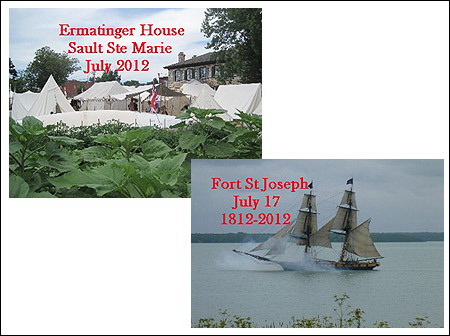 This past week saw members of the Incorporate Militia of Upper Canada travel the 7 hours to Sault Ste Marie and St Joseph Island.

On July 17, 1812, the first shot was fired during the War of 1812 in North America at Fort St Joseph on St Joseph Island.  St Joseph Island, is the second largest island in a fresh water lake.  From here attacks were launched on Fort Mackinac

On Wednesday we moved on to Ermatinger Old Stone House in Sault Ste Marie for their commemoration of the War of 1812.  Commemorations included displays, vignettes , the pillaging of Queen Street and participation in the Rotary Fest parade.

We would like to thank our hosts, the City of Sault Ste Marie, the gracious staff and volunteers at Ermatinger Old Stone House and Dave Brunelle for the initial invitation. 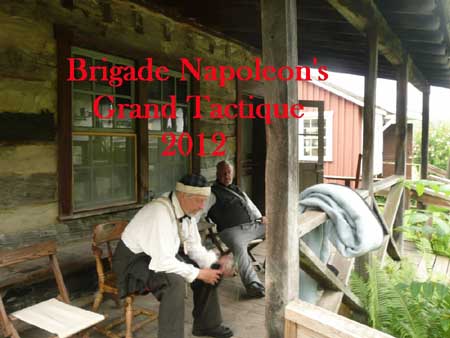 Even though this weekend was a weekend “off” several members of the Incorporated Militia of Upper Canada found period “things to do”.  Brigade Napoleon’s grand Tactique 2012 was held in Old Bedford Village in Bedford PA.  This “European” tactical included infantry and cavalry!  We don’t often get to see dragoons and horses at our events.  1812 regiments from Ontario and Eastern US states made up the man power.

Innisfil Beach Ontario also supported an 1812 event.  One of our more august members was able to attend and bring his knowledge, charm  and artifacts .