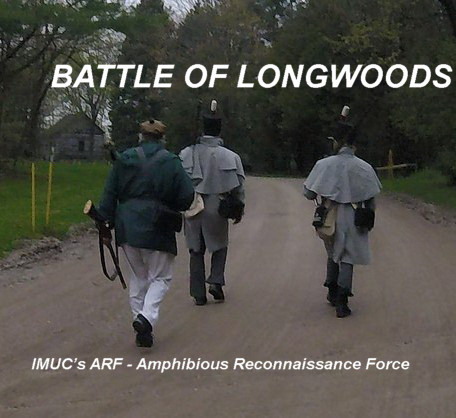 We fell in with the 49th.  This seemed appropriate a our original uniforms were the castoffs of the original 49th! The battle was held where the sutlers usually set-up.

The Americans retreated through that treeline into one of the cabins.  Another British unit entered the cabin and chased the Americans out.  The US troops went into the registration cabin and we charged in after them - following them out the door.

The US forces were quickly surrounded and dropped their muskets on the ground surrendering to the 49th/ARF. (ARF = IMUC’s Amphibious Reconnaissance Force)

It was a different sort of scenario.  There were around 10 Americans and just over 30 British.

For the past 10 years members of the Incorporated Militia of Upper Canada have been involved with the Georgina Pioneer Village’s Rise to Rebellion, 1837 school program.  Several hundred local grade 7 students worked through half day Rebellion experiences that included drill with the Rebels, drill with Her Majesty’s forces, women’s work, English country dancing, a sutler’s side show, rebel prisoner experience and the role of weapons/  They were involved with a debate between William Lyon McKenzie and a member of the Family Compact and participated in the march down Yonge street to Montgomery’s Tavern.  The members of the US 22nd provided the Rebels and IMUC , the loyal militia.  The Georgina Pioneer Village provides a great setting for the program and our newly trained troops and rebels all enjoyed the time learning more about Canada’s history!

Some pictures can be found here.