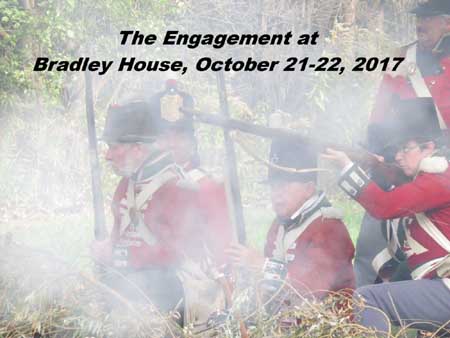 The Incorporated Militia of Upper Canada and our alter-egos, The Incorporated Malcontents of Upper Connecticut were present for both battles on Saturday the 21st.as set up by our hosts, the 2nd York Militia. As loyal Connecticut-ians we fell in with the Canadian Volunteers to raid Bradley House in the morning. In the afternoon we returned to redcoat to chase the same Canadian Volunteers away! The battle scenarios through a mock camp went well. Other units present included members of the Glengarry Light Infantry, The Royal Newfoundland Regiment, the 41st, The 60th Regiment, The Canadian Volunteers. The British Indian Department, The Royal Scots and the Canadian Fencibles.

Again, thanks to our hosts Matthew Didier and the 2nd York Militia for hosting and inviting us to participate.