At the Walpole First nations’ Pow Wow The Incorporated Militia of Upper Canada  and the cannon crew of the Earl Of Moira attended to help commemorate the 1764 Treaty of Niagara and the 1796 St Anne island Treaty.  The St Anne Island Treaty made the following promises to our Loyal Native Allies!

“You continue to be perfectly free and unmolested in your hunting grounds.

You are free to pass and re-pass freely undisturbed, to trade with whom you please.

This land shall remain yours forever and should any persons come to ask from you a part of these lands, turn from them with distrust and deny them their request.

God Save The King” 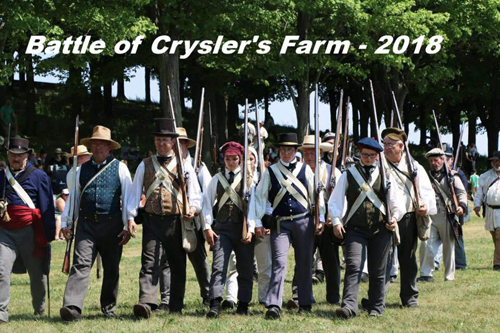 Several from our Incorporated Militia Expeditionary Force Journeyed to The Battle of Crysler's Farm near Upper Canada Village in Morrisburg. Ontario. Their recognizance duties had them infiltrate the American Forces to bring back information about US plans and strength! We believe they had too good a time! Apparently what happens at Crysler's stays at Cryslers!!

Some pictures c/o Darlene Kingstone can be found at; 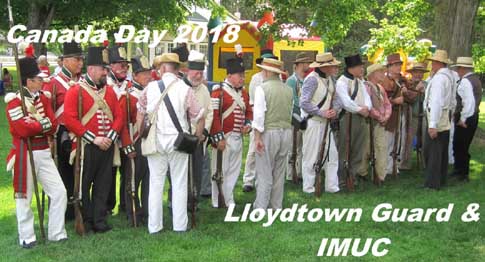 A little on the warm side!

On Saturday June 29, the Sharon Temple celebrated 100 years as a museum and on Sunday July 1st, Canada Day! The Lloydtown Guard (AKA The US 22nd) continued their cause of Freedom and Liberty of the 1837 Rebellions! IMUC cooperated by supplying the militia summoned by the Family Compact! Although the original Incorporated Militia were disbanded in 1815 after the war, they were recalled in 1837 to help the government of the day with the Rebellions.  The “troubles” were over before they were able to serve.  This Canada Day we helped to celebrate by recalling yet another important chapter in Canada’s history, on ground where some of it originally got started.