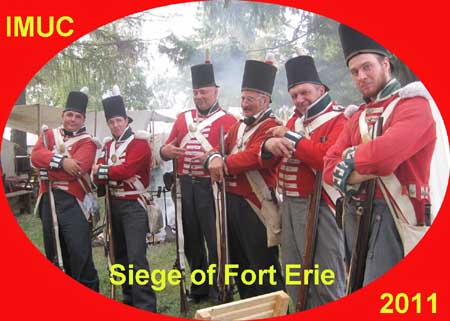 The Siege of fort Erie, 2011, was very well attended!  British, Canadian, Native and American units came from far and wide to make this a very successful 1812 event.  Both sides worked very well during the siege, surrender and recapture.  The Fort Erie staff and the Niagara Parks staff pulled out all the stops to make us all feel very welcome.  Though “warm” all weekend, the skies cooperated letting most of us get out canvas packed before the rains came! 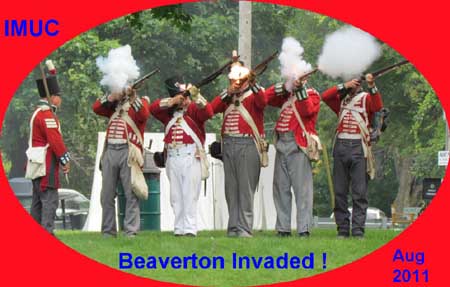 Beaverton Invaded! - A “What if?” story.

Beaverton is likely typical of the early settlements built along the waterways that were the highways of Ontario’s early years. But, what if Beaverton were located on Lake Erie?

In the spring of 1814, settlements on Upper Canada’s Lake Erie shores were worried about topsails on the horizon. Late in 1813, Master Commandant Oliver Hazard Perry, US Navy, led a small scratch built fleet of warships against a similar flotilla of British vessels led by Commander Robert Barclay, Royal Navy, and defeated them decisively, capturing all the British ships in the bargain. After that, US mastery of the upper lakes was barely challenged.

Even the previous spring and summer, the town of York (now the city of Toronto) was twice captured by US forces. However RN forces on Lake Ontario continued to dispute the US Navy flotilla and raids against lower lake settlements were rare.

Not so those quiet towns and villages on Erie’s shores as Brigadier Duncan MacArthur, US Army (the direct ancestor of WWII’s famous Douglas MacArthur), led raid after raid in efforts to destroy Ontario’s capacity to resist the annexation planned by the War Hawks in Washington during the War of 1812.

Needless to say, their desires were foiled, not least by the resistance of the local populace who organized into militia companies and who were bolstered by British troops and First Nations’ warriors.

MacLachlan’s/US 25th Infantry, the Lake Simcoe Squadron, the Incorporated Militia of Upper Canada and other re-enactment groups involved are dedicated to showing the public the elements of that struggle for survival from which emerged the concept of the Dominion of Canada. We are pleased to be able to demonstrate the tactics of that conflict as well as show how an army on campaign would function, both as bachelor soldiers and family men, living under canvas, cooking on open fires, and enjoying simpler pleasures when opportunity allowed.

We are excited about bringing our “show” to Beaverton.

Spring 1814: Beaverton has been selected by the invasion planners as a likely target for a raid by amphibious forces of the United States. While private property will be respected (The US does not make war on civilians), material that is deemed useful to prosecuting the war by British interests is to be destroyed, including grain, livestock, blankets, arms, and factories such as smithies and mills.

Summer 1814: The raiding force will be assembled and is to arrive off Beaverton’s port facilities no later than Friday August 12. It is not anticipated that any resistance will be met but a sufficient force will be available to secure the village and an assessment of Beaverton’s suitability as a headquarters for an inland invasion is to be made. The force will consist of elements of the 25th Infantry Regiment and the 1st Regiment of Rifles as well as a party of sailors to be utilized as the commander sees fit but may find employment on shore as artillerists.

If the commanding officer believes there are sufficient facilities at Beaverton (which may include locals sympathetic to liberation), then plans should be made for a body of soldiers to be stationed here. Otherwise, destruction of goods deigned to be useful to the British cause, are to be taken or destroyed to prevent their use by the enemy.

All this is to be completed by week’s end for it is believed that it will require that time or more for the enemy to respond and send a superior force to dispute the occupation. 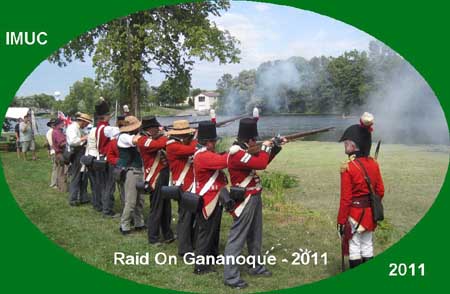 On September 21, 1812 a US force of some regulars and militia under Capt. Benjamin Forsyth attacked Gananoque.  The village was an important forwarding point for supplies moving up the St. Lawrence from Montreal to Kingston and was garrisoned by a detachment of the 2nd Leeds Militia under Col. Joel Stone.  After a spirited resistance, Stone withdrew his force comprising two subalterns and about 40 soldiers.  The Americans seized the stores and burned the government depot.  As a result of this raid, a blockhouse, was begun in Gananoque the following month and was completed in 1813.


This year to commemorate the raid, the Incorporated Militia of Upper Canada set up camp on the grounds of the Gananoque Town Hall to help train the local militia in the tactics they needed to fend off further raids.  Young and old participated and we were able to once again send the “pirates” packing, back across the river to the United States.

Additional pictures from The Raid on Gananoque 2011 can be found at: 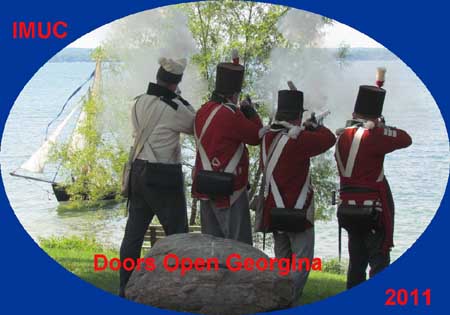 During the War of 1812, as in most conflicts, there was fear of invasion.  In 1813 the US twice invaded the capital of York (Toronto) .  In 1812 the US navy was ranging up into Lake Huron and put forces ashore at the mouth of the Nottawasaga River at Schoonertown (Wasaga Beach).  With US forces both north and south of Lake Simcoe, a major trade route, it was deemed prudent to construct a lookout to watch for the invaders and to give warning to those loyal to the Crown.  Roches Point was thought to be suitable.