Our Expeditionary Force joined members of The Royal Newfoundland Regiment, The Glengarry Light Infantry, the US 23rd and sutlery friends for this year’s Midland Winterfest at Little Lake Park.  Our guys were real glad that wool was the fabric of choice in 1812!  All went well, the public enjoyed themselves and no one froze to death!!

At the same time as the Midland Winterfest , one of our members, as a guest of a regimental friend, was attending an American Civil War event near Mt Dora Florida – the Battle of Townsends’ Plantation.  Much of the same equipment, similar battle tactics and the same love of history could be seen.  The white stuff is sand, not snow!  There is something about the aroma of canvas, wool and campfire smoke that gets into your blood, both north and south of the border!

IMUC and the 200th Anniversary of the Battle of Ogdensburgh! 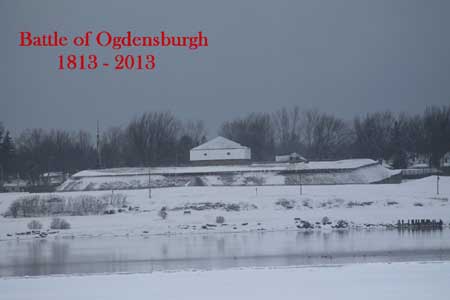 
Local video coverage can be found at: http://www.wwnytv.com/news/local/Watch-Battle-Of-Ogdensburg-Weekend--192772201.html