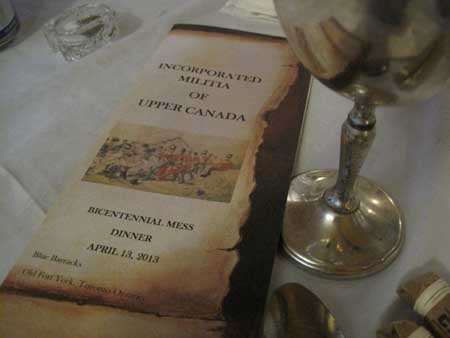 In March of 1813 by an act of the Legislature, The Incorporated Militia of Upper Canada came into being.  On Saturday the 13th of April 2013, we celebrated our 200th anniversary at our Annual Mess Dinner at Old Fort York in Toronto.  With guests from the Glengarry Light Infantry, The Royal Newfoundland Regiment, the US 22nd, The Lake Simcoe American Squadron, The Crown Forces Sutlers, The Canadian Volunteers and the 104th we celebrated 200 years of history.

Our guest speaker, Jeff Wakefield, filled us all in a little on the founding and roles of the sutlers during our time period and before.  A rather loud social hour was followed by a buffet dinner , The Loyal Toasts and Period Dancing.  Our Regimental Dance Mistress, Brenda Lightfoot, with the help of our in-house musicians, The Murray Family, helped work off the calories from dinner!

The Loyal Toasts included one to our own recent “Absent Friends” given from the heart by Will Woods of The Glens.  We miss you Tim!
Great site, great food, great friends!  Doesn’t get any better!!

200th Anniversary The Battle Of York 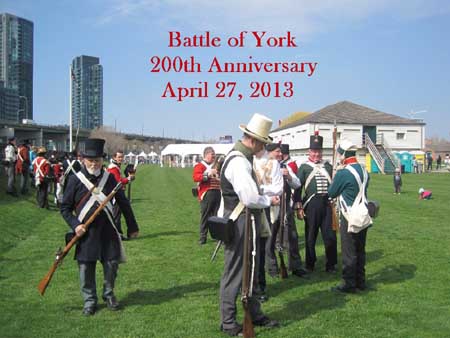 Today marked the 200th anniversary (to the day) of the Battle of York.  Members of the Incorporated Militia of Upper Canada participated in the Commemoration Ceremony at the Fort.  At the original battle, the King’s Regiment, the Royal Newfoundland Regiment, The Glengarry Light Infantry, the York Volunteers, Our Native Allies and the Incorporated Militia were present.  Today re-enactors portraying these regiments and groups were at the fort along with the Lt Governor, David Ontley, and members of the modern Canadian Forces.  Greetings were brought from the different levels of government with everyone remembering and thanking those brave soldiers and citizens that had fought to protect Canada.

Prior to the ceremony at Fort York, Prince Philip presented the 3rd Battalion of the Royal Canadian  Regiment with a new set of Colours at Queen’s Park.

Two Youtube links to the Battle of York 200th Anniversary Military Parade can be found at: