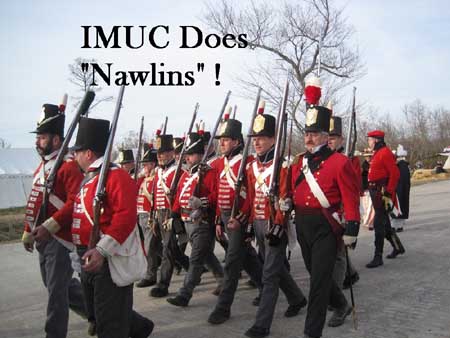 After much anticipation and planning, the Battles of New Orleans 2015 have been successfully completed.  IMUC came by bus, plane, truck and car picking up a couple of Royal Newfs on the way.  There were 5 battles over three days, with hundreds on each side.  The site in Chalmette Louisiana was cleared only a month ago.  It was incredible to find out that 10 years ago, during Katrina, the site was under 18 feet of water and hurricane debris! There wasn’t much “dying” as the ground was rough and of questionable quality!

We met “British’ re-enactors from all over the US, even from as far away as Montana and California.  At least one Australian made the trip and the 93rd and 44th came from England.  It was good to see so many regimental friends both on site and in the French Quarter. One of our people found a notice posted in a local museum that stated “In the US, the War of 1812 is dimly remembered as the Burning of The White House and The Battle of New Orleans”.  Hopefully we have helped correct that view!

Fox TV link to the Battle of New Orleans:
http://www.fox8live.com/story/27823420/front-lines-of-victory-re-enactment-of-the-battle-of-new-orleans#.VLVD-sKOTJA.facebook

Additional pictures will be added as they come available.