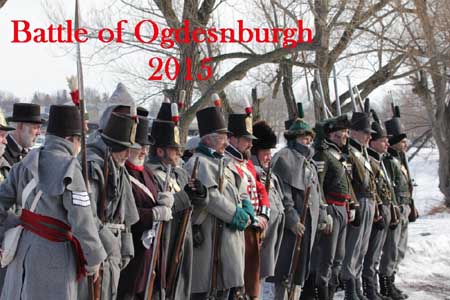 The IMUC Expeditionary Force made it home safely from Ogdensburgh!  It should really be referred to as the Battle of Ogdensburrrrrrrrrgh! Paul Andersen was able to get some pictures.  We picked up a few more on Facebook thanks to Dana Denhoff and hopefully will add a few more from Ron Philips of the Glens!

Our pictures of this event can be found at:

One of our IMUC/Campfollower Cams was present with Nancy Kinsman in Niagara-on-the-lake this past Monday. Nancy was there for the 200th Anniversary of the signing of the Treaty of Ghent which should have formally ended the War of 1812.

Nancy Reported back that :

“Susan Ramsay and another volunteer, Onka, and I traveled to Niagara-on-the-lake for the commemoration of the signing of the treaty of Ghent. There was a lovely service at St. Marks (where Brock's funeral took place) and then procession to the town hall for refreshments, the toasts, speeches and the signing of the Treaty of Ghent re-enactment. US President Obama sent a message. After that there were more refreshments!”

Some pictures from the re-signing can be found at: