One of our members has a 10 year old who is very keen. His Mom had him do a "journal" of his experiences, and what follows is his project. 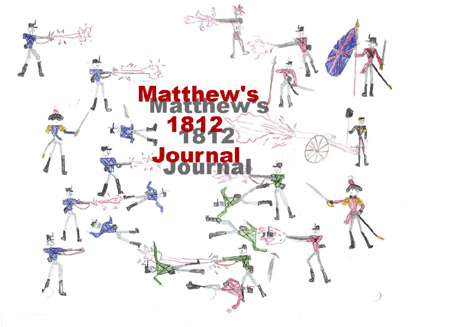 Webmaster's note: Please click on images and a larger version will open in a new window.

The War of 1812 lasted around 4 years with people loyal to President Madison against the people loyal to King George.  This means that Upper Canada was at war with the United States.  The war began when American President James Madison declared war on Great Britain.  The Americans thought that Britain was busy fighting Napoleon in Europe with all their resources tied up there.  They thought they could take Canada easily and keep King George out.  In response to the American march, Major General Sir Isaac Brock rounded up some local militiamen to help repel the American attack! 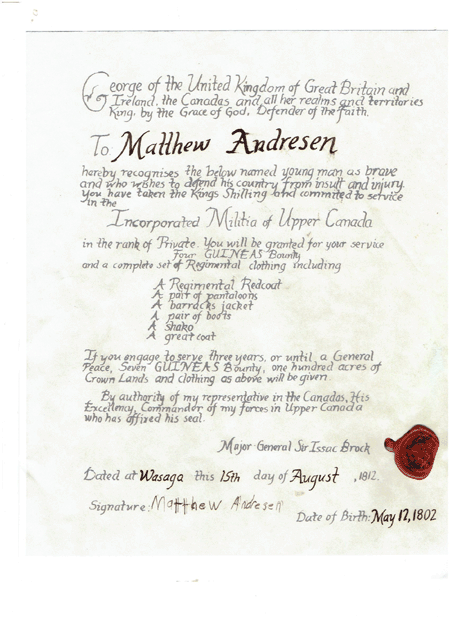 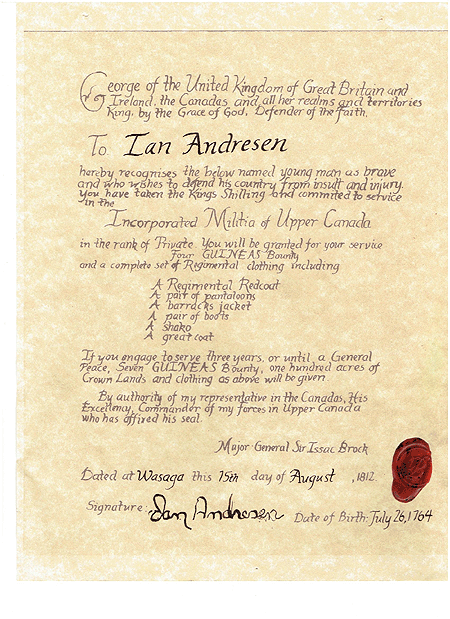 When Captain Charles Roberts heard the news, he gathered together his small garrison of older veterans: employees of the fur trading company and launched an attack on the American Fort Michilimackinak.  There were many heroes including Laura Secord, General de Salaberry and Tecumseh who all helped show the Americans that Canada would not be easily taken !!!!! 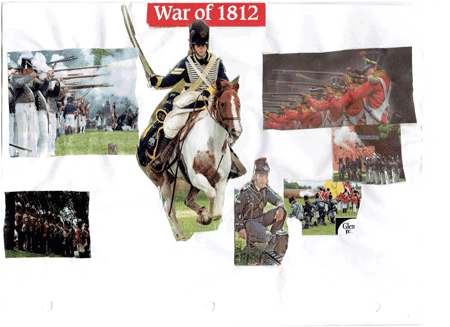 The war lasted from 1812 to 1815 with relatives fighting each other on both sides of the border.  On August 16th 1812 Brock attacked and took American Fort Detroit, but his victory was short lived. A year later the Americans took it back.  Tragically on October the 13th 1812 he mighty General lost his life early in the Battle of Queenston Heights.  After 12 hours of fighting the British proved triumphant!  The next year Tecumseh would die in the American victory at the Battle of the Thames.

In the year 1813 the American General Hampton mounted an attack on Lower Canada.  General de Salaberry gathered his men and went to confront Hampton.  After a short battle Hampton retreated back to Cornwall !!!!! 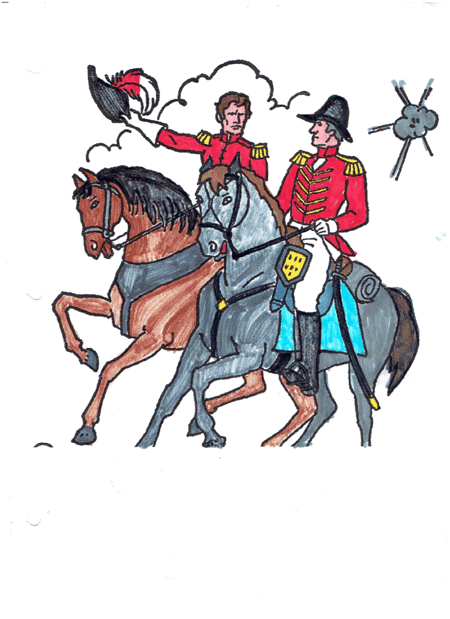 On August 4th 1814 The British lay siege to the Americans in the captured Fort Erie.  During the battle a cannon shell suddenly hit the powder magazine causing an explosion that killed many of the British attackers.  On November 5th 1814 the Americans realized that they could not hold the fort so they set a charge to destroy it. 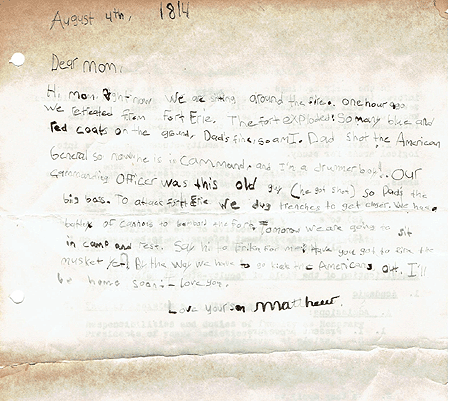 One evening, August 24th 1814, 4500 British troops under the command of a General Robert Ross attacked Washington.  You would think that the 10,000 American Garrison would destroy the attackers, but the British crushed the American Army and did not hesitate to burn the whole town!  After that they marched to a nearby American fort only to have to retreat back to Canada.  The war claimed many lives of our heroes. Whether they were famous or not, they all fought for their country and for what they believed.

When the war of 1812 ended in 1815, the British, the Natives, and the Militia concluded that they were victorious.  The Americans stopped antagonizing Canada by coming and fighting and they stopped invading.  The outcome of this war helped shape Canada for the events in the future.  For example, when the American Civil War erupted, Canada became a haven for slaves as thousands of them came to Canada on the underground railway.  They were able to run to this country of freedom and the Americans would not challenge Canada!  It might have taken a while to establish good feelings between Canada and the United States, but now we have had over 200 years of friendship with each other and we can safely travel across the border without the fear of being shot !!! 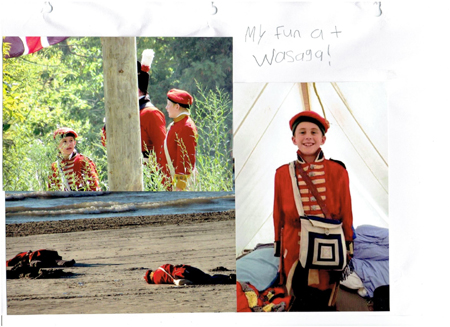 Webmaster's note: Please click on the above image for a larger version that will open in a new window.

A Weekend Recount of a Re-Enactment

This weekend it was only dad and I.  First on Thursday, Dad went to a re-enactment at Old Flort Willow near Barrie.  We were among the first people to get there so we got our fire going and got the best pick to set up our tent!!  After that I cooked dinner, but the sausage got burnt so we ate burnt sausages.  We sat around the fire until dusk and finally we went to bed. 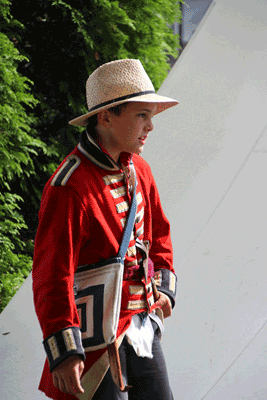 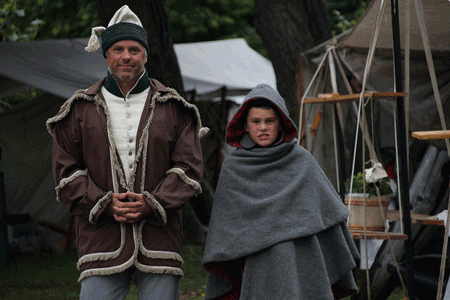 We were very busy that day! 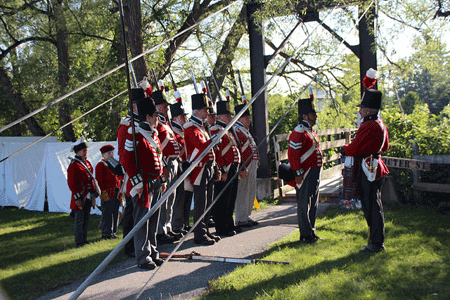 After “terrorizing” the kids we did a musket demonstration.  I got to fire the musket for the kids!!  When you fire the musket you see flames fling out of the barrel.  Finally it was lunch time and the food was decadent.  We got chips, pop, sausages and corn!  We marched around all day so I passed out in my bed when darkness fell upon us. 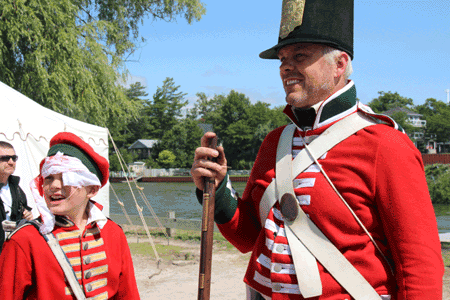 On Saturday it rained so hard our tent got soaked inside and out.  We packed up and left!  When we got home the girls had the house all warm and a hot bath ready for us.  That night I slept hard.

Next time I go to Fort Will, I hope it is warmer!!